Ask about this product   Available in PDF   X2Y Spice Download

Used for both EMI filtering and noise attenuation, the component is an effective EMC solution for common mode noise issue, and it allows to get rid of differential noise as well. It can replace DC common mode chokes and provide better performances as an EMI filter or RFI filter. It can also replace Common Mode Chokes in many cases of RF interference or noise cancelling. This solution should be considered for all EMI noise suppression filters and for noise filtering.

Automotive version (AEC-Q200) available for many values: please see details in the below table of capacitance values. Please contact us if another value is needed for automotive application.

GSM handsets transmit in the 850 and 1850 MHz bands using a TDMA pulse rate of 217Hz. These signals cause the GSM buzz heard in a wide range of audio products from headphones to concert hall PA systems or “silent” signal errors created in medical, industrial process control, and security applications. Testing was conducted where an 840MHz GSM handset signal was delivered to the inputs of three different amplifier test circuit configurations shown below whose outputs were measured on a HF spectrum analyzer.

X2Y configuration provided a nearly flat response above the ambient and up to 10 dB imrpoved rejection than the conventional MLCC configuration.

When used in circuit 1 configuration the X2Y® filter capacitor is connected across two signal lines. Differential mode noise is filtered to ground by the two Y capacitors, A & B. Common mode noise is cancelled within the device.

Experts agree that balance is the key to a "quiet" circuit. X2Y® is a balanced circuit device with two equal halves, tightly matched in both phase and magnitude with respect to ground. Several advantages are gained by two balanced capacitors sharing a single ceramic component body.

In this example, a single Johanson X2Y® component was used to filter noise at the input of a DC instrumentation amplifier. This reduced component count by 3-to-1 and costs by over 70% vs. conventional filter components that included 1% film Y-capacitors.

A common design practice is to parallel decade capacitance values to extend the high frequency performance of the filter network. This causes an unintended and often over-looked effect of anti-resonant peaks in the filter networks combined impedance. X2Y’s very low mounted inductance allows designers to use a single, higher value part and completely avoid the anti-resonance problem. The impedance graph on right shows the combined mounted impedance of a 1nF, 10nF & 100nF 0402 MLC in parrallel in RED. The MLC networks anti-resonance peaks are nearly 10 times the desired impedance. A 100nF and 47nF X2Y are plotted in BLUE and GREEN. (The total capacitance of X2Y (Circuit 2) is twice the value, or 200nF and 98nF in this example.) The sigle X2Y is clearly superior to the three paralleled MLCs.

When used in circuit 2 configuration, A & B capacitors are placed in parallel effectively doubling the effective capacitance while maintaining an ultra-low inductance. The low inductance advantages of the X2Y® Capacitor Circuit enables high-performance bypass networks at reduced system cost. 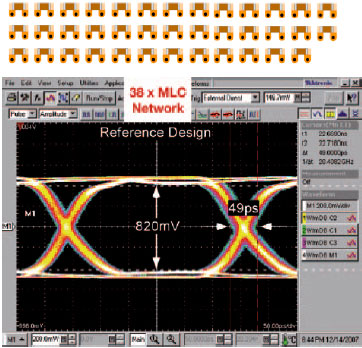 1:5 MLCC REPLACEMENT EXAMPLE
X2Y's proven technology enables end-users to use one X2Y capacitor to replace five conventional MLCCs in a typical high performance IC bypass design. Vias are nearly cut in half, board space is reduced and savings are in dollars per PCB.

The following are key elements of Good Mounting Practice when applying X2Y components with traces and vias on the PCB.

X2Y applied as dual-line input filter. IC +/- power pins on opposite sides, X2Y is applied in bypass on each power rail.

Multiple X2Y components are attached between the inner Vcc an GND planes on this PCB for FPGA power bypassing.

Using 6-vias and a continuous trace under the X2Y results in the lowest PDN impedance to GND.

Using 5-vias, removing via between the IC pin and X2Y, maximizes RF noise immunity. All noise must first go through the X2Y filter before reaching the IC power pin.

Thank You for your interest in the X2Y® Solution